General Sherman’s march through the south left a wake of death, destruction, and despair behind, helping secure The Union’s victory by destroying The South’s spirit and resources. His campaign brought the horrors of war to civilian doorsteps, and it was an early advancement towards total warfare in the 20th century.

(Hover over pictures for citation) 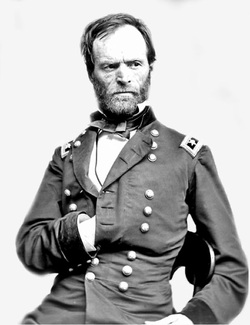 He's the rugged, stoic, and needs a haircut type.


It ended 37 days and 387 miles later, on December 21st of that year in Savannah, Georgia. 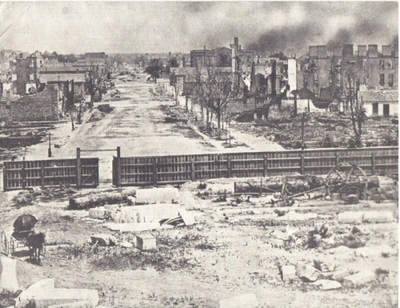 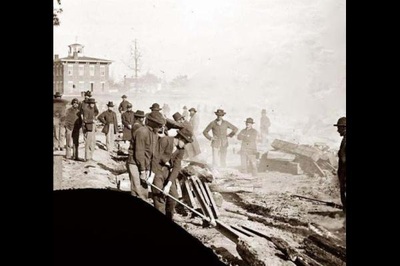 Barnard George. A group of Union soldiers tearing up Confederate railroads, 1864. Library of Congress. Photograph. 5 December 2013.
This is what was left of the cities he marched through.
Sherman began his march under orders from Ulysses S. Grant.

Throughout his march Sherman didn’t have any Union supply lines, which is usually a terrible idea because no supply lines means no food, clothes, or weapons.

But Sherman had a plan- the Scorched Earth Policy:

The soldiers either ate or burned everything they came across. Sherman forwent supply lines in favor of “foraging” and “living off the land”. Which could be roughly translated to stealing and pillaging . The very hungry caterpillar munched onwards, eating everything in sight. Civilian hunger and terror spread through The South, no one remained unaffected. The Very Hungry Shermanpillar chewed through The South’s economy right on to the yummy tootsie roll center of victory, stopping to savor the nougaty flavor of Atlanta and Savannah.

How many miles does it take to get to the tootsie roll center of the Confederate pop? 285 miles. 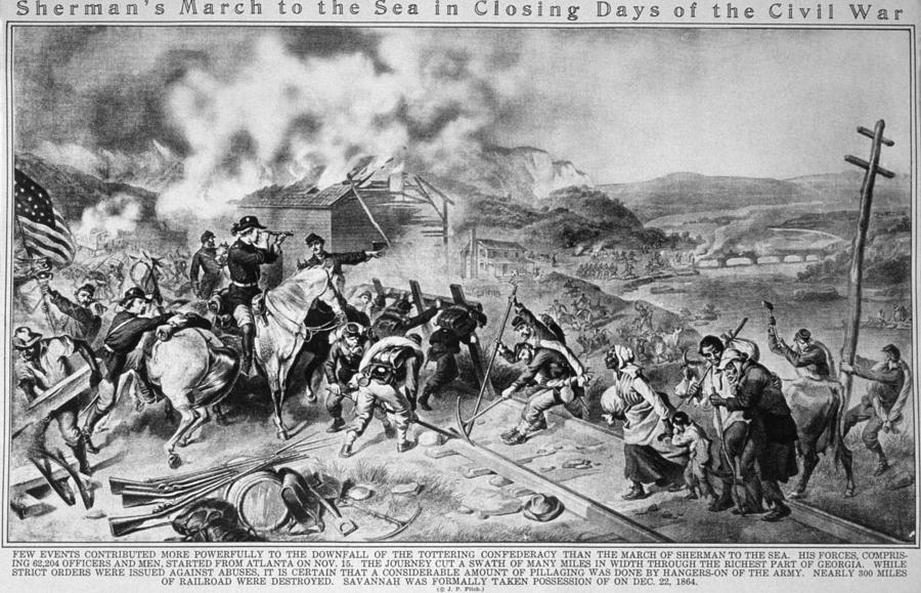 This engraving details some of their more famous acts, like the burning of depots, the destroying of railroads and telegram lines, and the stealing of supplies. They were regarded as an evil force by the South, and refugees such as the ones at the bottom spread accounts of terror.

This was as much a psychological attack as it was physical.

By striking fear into civilians Sherman lowered morale and support for the Confederacy. 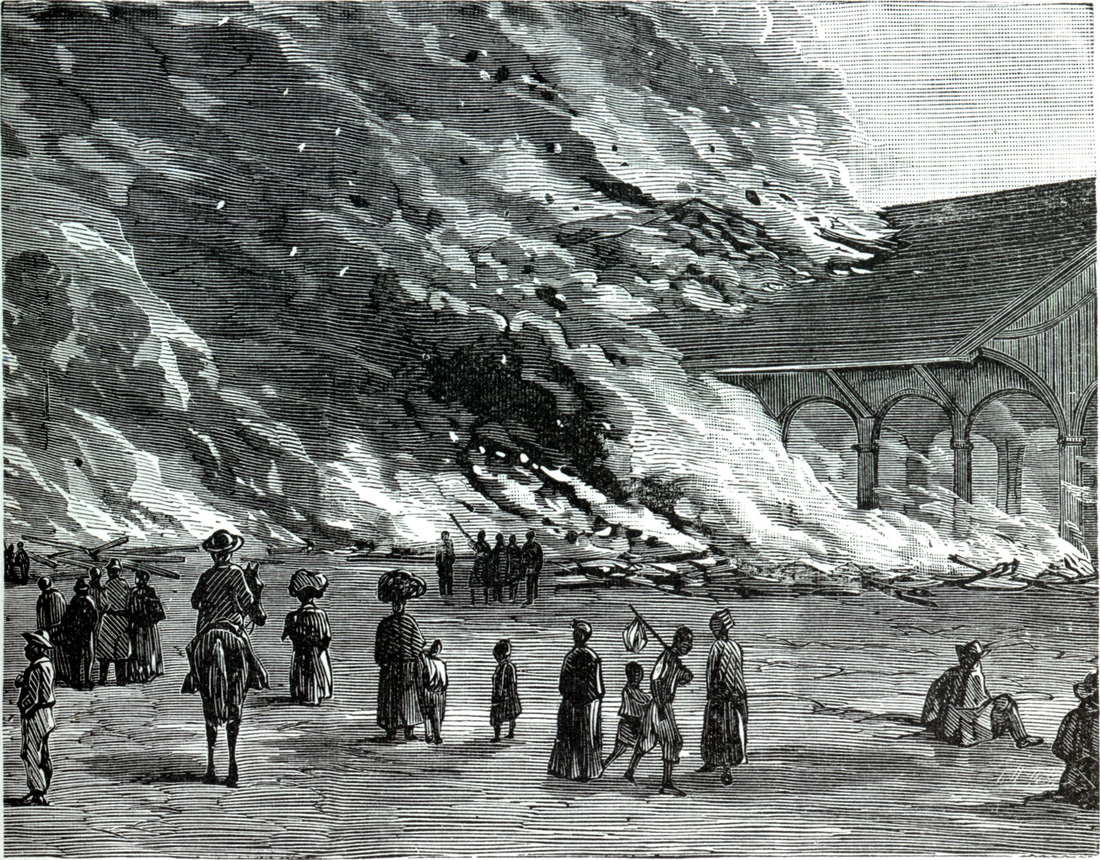 Sherman's troops burning a railroad station. Civil War Battles. n.d. Engraving. 6 December 2013.
Total warfare meant taking the warfront to the civilians. By burning large cities like Atlanta, Savannah, and Columbia they showed the citizens just how terrible the consequences of war could be.

This engraving shows a burning rail depot and many citizens of the South watching it in horror. No longer was the battlefront a far off event, now it was their homes and their cities suffering the effects of war. 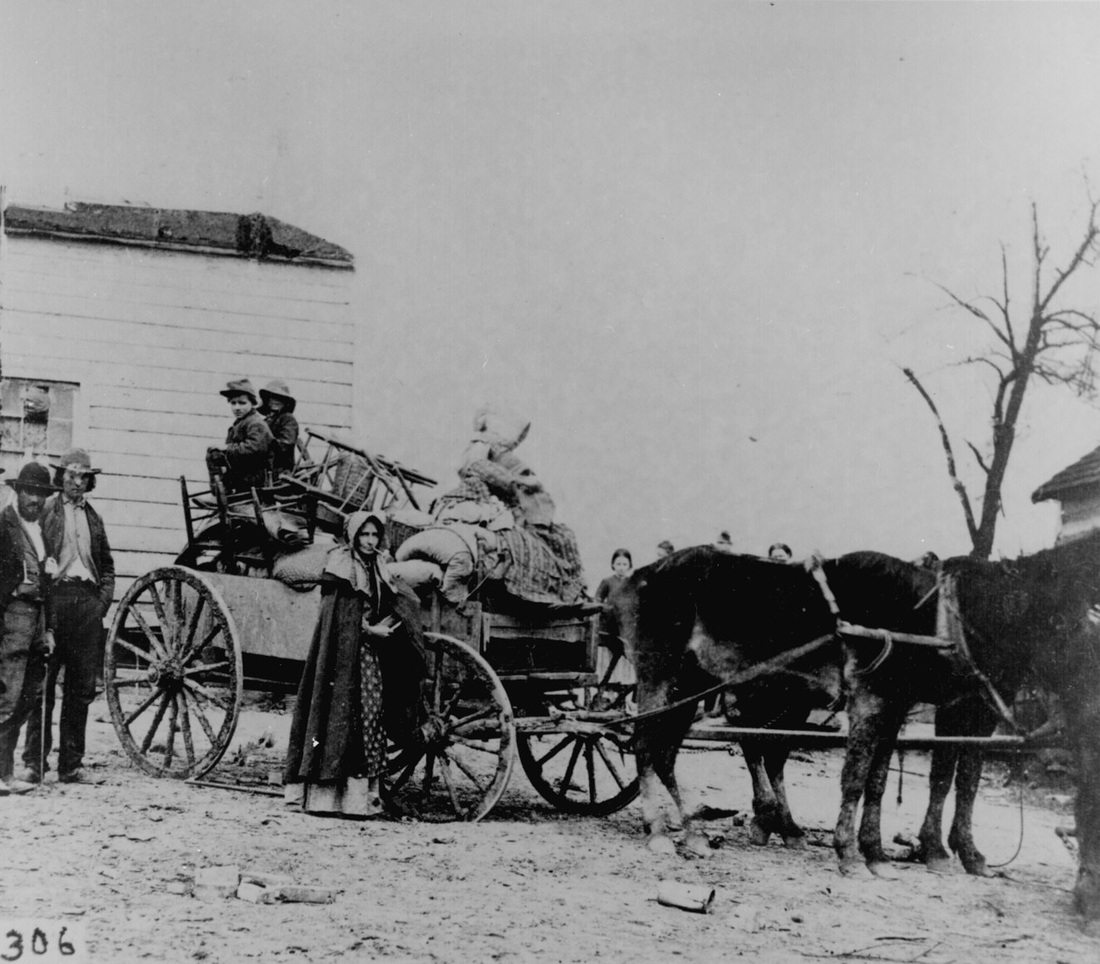 A refugee family fleeing with belongings loaded on a cart. Civil War Photos. 1864. Photograph. 6 December 2012.
Civilians in the path of destruction fled their homes in fear. Nobody wanted to be caught by Sherman’s vicious “Blue Bellies” and anybody resisting was sure to have their home set ablaze. Accounts from refugees and newspapers helped spread the news of Sherman's March past the borders of Georgia. 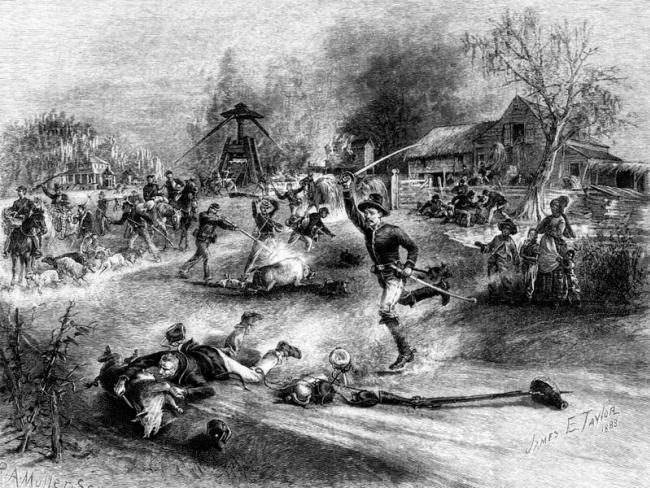 Sherman's March to the Sea. Battles and Leaders of the Civil War, vol. 4, R.U, Johnson and C.C. Clough Buel. n.d. Engraving. 6 December 2013.
"It is only those who have never fired a shot nor heard the shrieks and groans of the wounded who cry aloud for blood, for vengeance, for desolation. War is hell." - William Tecumseh Sherman

Note that Sherman did not actively harm the people directly; deaths were usually a result of starvation.
In this engraving, Union soldiers slaughter all the animals of a southern family. They wouldn't eat all the meat; rather, the goal was to eliminate potential supplies and resources for the Confederate Army. Like in Gone with the Wind, families had to start from scratch, completely rebuilding their lives after a visit from Sherman's forces. 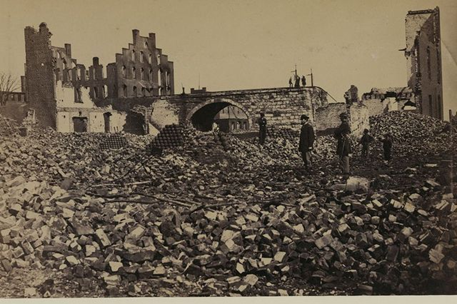 This is a rail depot in Atlanta after Sherman sacked Atlanta. Dismantling depots were key to Sherman's plan because it hindered the movement of southern troops and southern supply lines while also demoralizing its citizens.

These harsh tactics by Sherman struck fear into the hearts of the South - and more than that, hatred. The South would not forgive the North easily after such destruction. The anger and feelings of loss carried well over into the Reconstruction Era.
It also severely disrupted the South's economy: estimates are around 100 million dollars, or today's 1.4 billion, in loss.

"I beg to present you as a Christmas gift the City of Savannah, with one hundred and fifty guns and plenty of ammunition, and also about twenty-five thousand bales of cotton."

-Sherman in a telegram to President Lincoln